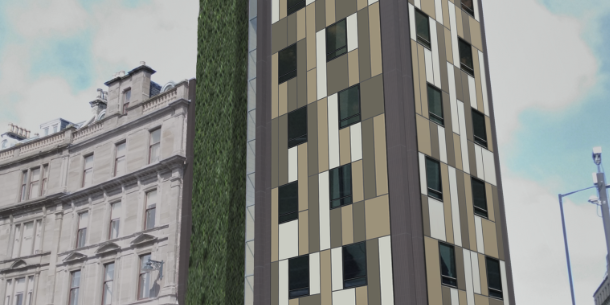 The MRP Group are happy to announce the release of Project Tay in Dundee to the market. Located at 5 Whitehall Crescent, this is a 35 unit aparthotel, consisting of a mix of studios, one and two beds with area for a ground floor restaurant and back of house space, two off-street parking spaces and a deliveries parking bay. The site is situated in a prime location in the heart of the city, with restaurants, retail and office space close by. The Overgate shopping centre, the newly upgraded train station, the Waterfront and the new V&A Museum are all within minutes of Project Tay. Project Tay’s prominent location affords amazing views of the Dundee Waterfront, the V&A museum and the river towards the Kingdom of Fife.

The waterfront development has transformed Dundee into a global destination for visitors and business. Dundee has received international recognition, being named the best place to live in Scotland by The Times in 2019. As well, The Wall Street Journal ranked the city fifth in its ‘list of hot cities’. This exposure has asserted Dundee as a city of growth and development, with a highly skilled workforce and significant sectors growing as a result of investment specifically in the health and science industries. As a regional economic centre, Dundee has greatly benefited from emerging sectors and continual investment such as the new Waterfront which will “enhance the physical, economic and cultural assets” of the city. Investment has been key in regenerating Dundee by bringing in more office space, tourist attractions and the Dundee Waterfront. The £1bn transformation encompasses the new V&A museum, rail station and accommodation with more that will enhance Dundee as a physical, economic and cultural asset.

The property is owned by Assurance Developments Limited, and The MRP Group have been exclusively retained to find an operator. This a fantastic opportunity to lease or manage a new development in Dundee’s city centre, with the potential to invest into the property. Operators will greatly benefit from the demand for extended-stay accommodation, as the market is dominated by branded hotels which presents a chance for an operator to take advantage of a niche market. As well, Project Tay will be the second largest supplier of extended-stay accommodation, allowing an operator to be a prominent aparthotel in Dundee.

Max Thorne, The MRP Group’s CEO, said: “We are very excited to announce Project Tay. Dundee has seen a lot of activity, both from investors and global interest which only confirms our belief that Dundee is a world-class destination. As a key city in Scotland, extended-stay accommodation is in high demand as more businesses relocate to take advantage of upcoming cities. Consequently, Dundee has seen this demand soar. The city is a cosmopolitan hub for business and leisure, recently being announced as the UK’s only UNESCO City of Design. As you can see, Dundee holds a lot of promise and we look forward to taking this aparthotel to the next steps.”